An Assassin’s Touch by Stephani Hecht 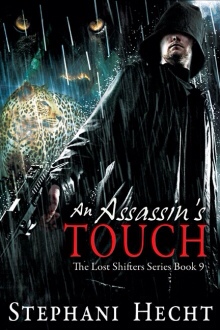 Description: Nobody realizes better than Shane that he has no real future. As a Leopard, he's destined to live alone and be reviled by his fellow feline shifters. Instead of letting that hurt him, Shane just throws himself into his work as the coalition's top assassin. A job that his breeding makes him perfect for. He tells himself that he doesn't need anyone else–that he's fine living a solitary life. Then one, brief encounter with a bratty, Panther shifter named, Trevor, changes everything. Now all Shane can think about is the Panther and how to get the man back in his bed. The only problem is Trevor hasn't given Shane so much as a second glance since their one time together. A situation that frustrates and intrigues Shane even more. Trevor has always enjoyed playing the field. With so many sexy temptations at his disposal, he doesn't see why he should have to settle for the same warm body in his bed night after night. While the sex with Shane had been great, Trevor is determined to put the encounter behind him. A task that's not as easy as it would seem. Not when every night he continues to dream of the Leopard. Or how, whenever they're in the same room, Trevor can't stop himself from wanting to reach out and caress the Leopard. Trevor knows that there can never be anything between them and resolves to put his desires behind him. Then Shane needs help on one of his assignments and he turns to Trevor. The mission proves more dangerous than either one realizes. They soon find themselves fighting for their lives. Will they be able to learn to trust each other in time to save themselves, or will their past doubts destroy them?

Review: Shane is determined to be on his own knowing the lonely life of being a Leopard. Trevor has decided to try and forget his one quickie with the Leopard shifter and move on. But the two can't stop thinking about each other and are determined to have each other at least one more time.

Shane has been one of my favorite character throughout the series and I knew I would love his story when it finally came out. I was not disappointed, I loved this assassin's story! The best part is Shane still remains his dark self even as he learns to love and what it means to have a mate.

Stephani Hecht's writing has you pulled into her world of sexy shifters in the first sentence. Her writing has you turning the page again and again in hopes that the Shane and Trevor will finally be together. She paints a dark canvas of a broken assassin who wants nothing more than to claim his sexy Panther. Then she leaves us breathless with a pulse racing cliff hanger! Thankfully book 10 is out. 😉

Trevor and Shane's story is breathtaking and dark. I highly recommend this book to anyone who loves a dark assassin meeting a light heart.

Events Coming Up for May 7th-May 13th

Here are the events for M/M paranormal romance authors and releases coming up for the week of May 7th to May 13th.

All release dates are subject to change.

Authors and Publishers: Please let me know any events or book releases you have coming up and I will be happy to add the information to my blog! Please send me any information at Ask Me Anything

Okay, so I’m going to kick off my book reviews with my favorite couple, Dante and Brenden.

Dante and Brenden discover feelings for each other against all odds. Dante’s wild heart collides with Brenden’s innocence creating an unexpected and excitingly romantic story. Brenden saves Dante’s life plummeting our characters into a memorizing story on the path to discover love. But can their passion for one another ever truly work? Can opposites really attract?

Talented author Stephani Hecht takes us to a world of rebel vampires and their struggle against the Pure Born. Her light hearted characters mixed with the dark world of vampires is thrown together in a spicy mix that leaves the reader licking their lips for another bite.

An author in the making.

Come Write With Us

Romance Novels for the Beach

Find out which sexy books to bring with you, or leave behind, on your next beach vacation.